President Rivlin’s Speech to the Opening of the Winter Session of the 23rd Knesset:

“The coronavirus pandemic and its victims have led me to think about those who have lost their lives, about the invisible Angel of Death which does its dread deeds in isolated emergency rooms without family members being able to take their leave at the last moment, to hold hands, to stroke faces. To those dear people, nearly 2000 dead, I choose to dedicate words of prayer: ‘May God remember, and may the People of Israel remember the souls of those Israelis who have passed away this year because of the coronavirus. We will remember those pioneers and founders, Holocaust survivors, veteran immigrants, fighters and creators, gifted students, Jews and Arabs, men and women, young and old. They were all loved, all had names and faces. May we be forgiven for the sin we committed through helplessness, for not doing enough, for not being able to save them and because of which – lives were lost. Our Father, Our King, prevent disease in your home, and lead us to good days. Amen, may this be His will.’

I have seen for myself the medical teams, the volunteers, at Magen David Adom, at the healthcare organizations, in the social initiatives, those who care for the lonely and the isolated, those who work to bring computers that are beyond the means of schoolchildren, from north to south, across the whole country. I was moved and in wonder by the way we have stood side by side, Jews and Arabs, secular, religious and ultra-Orthodox, joining hands to fight the virus. The people in Israel understood the enormity of the moment, did what was required and paid a heavy personal, economic, religious, mental and cultural price, all so that we can get through this difficult time. And yet, I am sorry to say, as the crisis deepened, so did the disagreements and the splits between us. I never imagined with what power this disunity would hit us.

In December 1944, at the height of the saison – a period of open conflict between Jewish fighting organizations – Menachem Begin said, ‘The air is full of gunpowder. Speakers and leaders do not cease talking about civil war. One of them said – it has already broken out.’ Begin called on Etzel members then not to retaliate against the Hagana, since they were not enemies. ‘We will not engage in civil war under any circumstance, despite all the provocation.’ That is what Begin said. For you, this may be history. For me, it is biography. My sister Etti, of blessed memory, was turned in to the British, at the height of the saison. The informant was none other than a family member, a Rivlin. When the State of Israel was established, I was nine and a half years old. I have seen it at its most exalted moments, and at its deepest difficulties. As a child, I experienced the siege on Jerusalem, my heart bled when I learned the fate of the Altalena, and I demonstrated outside the home of President Shazar against the arrival of the first ambassador of Germany. I fought in the Jerusalem Brigade in the Six Day War and the Yom Kippur War. I was Speaker of the Knesset when Zvi Hendel from the right and Chaim (Jumes) Oron wept on each other’s shoulders at the result of the vote on the disengagement from Gaza. We overcame difficult and painful disagreements. The existential thread of the failure of the Yom Kippur War, the period of the Oslo Accords, the assassination of Rabin, the buses that exploded on our streets and the hard feelings that are still with those evacuated from Gush Katif and northern Samaria. We overcame them all! The people in Israel has proved time after time that it can get out of difficulties and crises. We have never despaired, we always had hope in us. Hope that helped us out of the trenches.

The current crisis is amongst the worst we have experienced because unlike other crises, it takes our basic freedoms from us and undermines our foundations as a Jewish and democratic state. We understand the need to fight the disease but find it hard to accept the loss of our personal freedoms, the inconceivable harm to the freedom to worship, the freedom to gather and protest, the freedom of movement and the freedom to work. We established a Jewish state so that we could always make our way to synagogue without fear or concern, and here we are shuttering the synagogues ourselves. We established a democratic state so that we could always give expression to our views, and as an opinionated and stiff-necked people, here we are limiting demonstrations and gatherings on our own volition.

The fight against the coronavirus is confusing, other, different from anything we have known. In the Yom Kippur War there was a front and there was behind the lines. Today, behind the lines is the front. We cannot escape the virus, even in the most closely-guarded places, and we find it difficult to understand how we can be a ‘ticking time-bomb’ as we go about our daily lives – a danger to our parents, our grandparents and to those around us.

Friends, I feel the air is full of gunpower. I feel the fury on the streets. But it is unthinkable that every night, demonstrators are beating demonstrators. Police are beating demonstrators. Demonstrators are throwing stones at the police. Israel’s tribality is breaking out through the cracks, and accusatory fingers are pointed from one part of society to the other, one tribe to the other. Stop! Please stop! This is not the way. Pain must have its place. No cry is unworthy of being heard. Only through acknowledging and listening to each other can we deal with the crisis. Israel has a sea of love, of helping society as a whole, public activity, wonderful human capital, individuals and communities – with boundless values and aspirations. Listen to them, know them, do not fight each other.

It seems to me as if we have lost the compass that was with us from independence until today. The compass of fundamental principles and values that we are committed to uphold. We must look forward. Forward to the short term, and forward to the long term. The virus is with us to stay, and we cannot deal with it if our hands are tied behind our backs. For more than two years, the Israel Police has functioned without a permanent appointment of its head. He is professional, thorough and without a doubt the No.1 policeman, but the police is dealing, right now as we speak, with one of the most complex challenges in its history. Appoint a police commissioner now!

For more than two years, the State of Israel has been running without a budget. The education system is unable to take a clear direction on dealing with the challenge of distance learning and many schoolchildren are being left behind. The digital gap is widening and we are in danger of losing the next generation. Do not allow the social welfare system to collapse for young people at risk without a framework, for those women facing brutal violence, for the elderly and the isolated, as poverty grows. Look after them today! Take care of them now! Businesses are failing, unemployment is high, the deficit is growing and the medical system us groaning under the burden of the ill. Pass the budget now and give Israel’s economy the basic stability it needs!

I met the heads of our local authorities, leaders of the cities, who give a sense of security and trust to the communities around them. Give them power, authority and responsibility to deal with the disease! Give them your trust, do not hesitate, you can rely on them! Concentrate on one, sole battle that we have to win. That is your task, and no other. Establish frameworks now that allow for life alongside the disease. Do everything, everything to bring back our basic freedoms.

Think now how we will be able once again to hug our grandchildren, how we will not leave our elderly family members to dreadful loneliness, how we will make it possible for bereaved families to visit the graves of their loved ones on Yom Hazikaron, and how we will celebrate Yom Haatzmaut 2020/5781 – may it come to us for good.

As a people, we must return to our compass, we must look forward and begin a process of repair – long, deep and systemic. As we learned in the IDF, when you get lost when navigating, you go back to the starting point. It is process that is not limited to the state of emergency. It is a process that demands difficult decisions. This is the time for attentive leadership, where the truth and the facts are its only guiding lights, brave, responsible, ethical, working for all people. Leadership that understands that connection and partnership between the different parts of this country are the guarantees for success in this national mission of ours today. I believe in this people, and I believe in our ability to prevail. Believe in yourselves, too.” 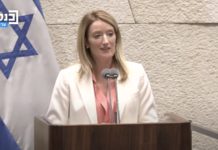 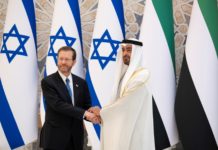 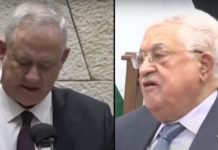 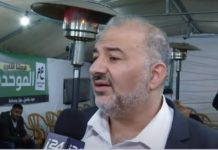